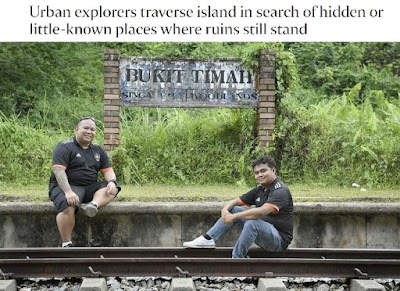 Urban exploration, where 'explorers' traverse the island in search of hidden or little-known places where ruins still stand.

There are a handful of urban explorer groups in Singapore, including Urban Explorers of Singapore, but T.R.E.E. is perhaps the only one that regularly organises free guided treks for the public.

Started in 2014, the group has 11 members in their late 20s to 50s who are in societies that focus on photography, nature and heritage .

In 2015, the group began to open its exploration trails to friends, before extending these to the public in the second half of last year.

Mr Muhammad Herizzad Ruslan, its team leader, says: "We hope to show unseen sides of Singapore that might disappear one day as the country continues to develop."

Treks are organised at least twice a month and participant numbers have risen from 30 when it started to about 50, says assistant team leader Faye Joseph S. Ramos, 36.